I’ve became entranced by my newest bike.  Never have I had so much fun riding or tuning a stock bike in my life.  The set up is as follows.  Lost the old Gunther carb, and went with a 17 Bing that I bought off of Mr. Burk in Nashville this year.  At the time I just saw it and wanted it.  I had no clue it would end up on my pug.  Switched out the old intake and reeds (which are a fucking joke btw…) for a 16mm intake and a Polini 2 petal that we had laying around.  Down geared from a 58 to a 56 in the rear.  It has an external condensor and a 5 coil points stator.  I removed 3 balls from the clutch, left  the vario as is and added a Polini launch lever.  If you have a variated bike you are lost without a launch lever IMO.  Then I just opened up the stock pipe and snatched that baffle out and put it back together.   It’s a pretty peppy bike now.  Its a solid 38 mph, sitting up just chillin.

Keep her in duh house!

If you noticed that pipe thats on there now isn’t the stock pipe that I talked about in the description, it’s because that pipe sucked big time.  Its the $77 “Proma Type” Circuit from http://www.1977mopeds.com.  It did make hills ever so slightly less annoying, but it also made the strait and flats unbearable.  It’s more restrictive than the stock deresticted, and it is on the loud side.  As if that wasn’t reason enough to leave this thing in a box somewhere in atl, it rattled the rivets out of the silencer the first day.  Come the find out that the silver piece on the baffle is feux?  Its just a cover for the actual baffle…  Baffling.

Oh, and if you are wondering what external condensor to go with, there is one on http://www.treatland.tv&#8230; 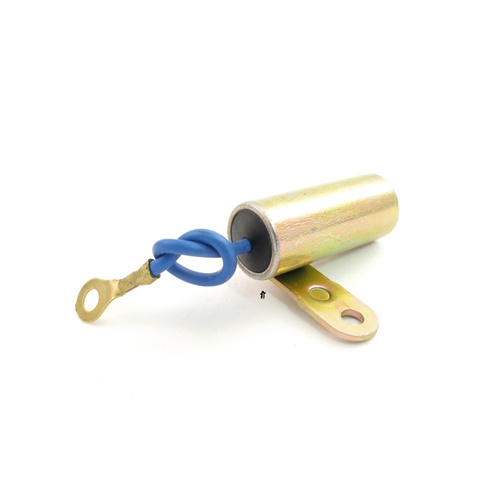 Or you can do what I did and go to the local parts store and ask them for a points condenser for a 70’s VW beetle.  It’s a little under seven bucks, and you get it right then and there.

Condenser by Beck/Arnley (part#172-1729) If they say they can’t find it, tell them it should be listed under “Ignition Components”

Wiring it up is pretty strait forward, at least it is for the five coil stator.  I’ve heard its slightly different for the 2 coil, with the rectifier and what not.  Just take that green wire (or the only wire coming out of it, lol) and snip it off right at the weird male connector in the middle.  Now take some other wire and give yourself enough slack to mount it where you please.  Just make sure that where you mount it will be a good grounding point because the condenser grounds through its mounting bracket. Take the end of your now long enough wire and put and eyelet on the end of it.  Attach that eyelet to the points where you disconnected the old one, and button everything back up properly.  Boom goes the dynamite.  This is a must if you plan on running the points for very long.  Its just a matter of time before the stock internal suffers a heat stroke from being cooped up in the flywheel, and shits the bed.

That’s it for now.  I have noticed that my stock vario isn’t fully variating…  I have an idea to fix that, so stay tuned!